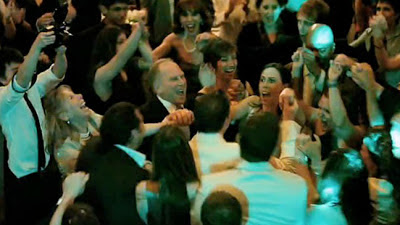 Tomorrow night, the 13th annual Atlanta Jewish Film Festival kicks off at the Cobb Energy Centre. The opening night gala begins at 5:00 PM with an open bar and food from landmark Atlanta restaurants like Alma Cocina, South City Kitchen, Woodfire Grill and more. “Hava Nagila (The Movie)” serves as the opening night film and promises to be a very lively start to the festival. Come sing along with us! The film starts at 7:30 PM. Don’t have your ticket yet? What are you waiting for? Get them now at www.ajff.org!

Film synopsis and trailer after the jump.

Encapsulating 150 years of Jewish history with humor and heart, HAVA NAGILA (THE MOVIE) traces the cultural impact of the instantly recognizable Hebrew folk song that transcended its origins to become a worldwide hit.

From the shtetls of Eastern Europe to the formative years of Israel to Bar Mitzvah staple, the ubiquitous dance melody (which translates to “Let us rejoice”) was later popularized by mainstream crooners Harry Belafonte and Connie Francis, as well as in novel renditions by Glen Campbell, Bob Dylan, Elvis, Lena Horne and even Chubby Checker. Surprisingly, the song was eventually adopted by seemingly every nationality, even in countries with no connection to the tune’s Jewish roots.

Packed with celebrity interviews and lighthearted pop culture references, and narrated by actress Rusty Schwimmer, director Roberta Grossman’s immensely entertaining, upbeat, toe-tapping documentary celebrates the resilient and jubilant spirit of a people, and the cross-cultural connections that can be achieved only through music.