Trending
You are at:Home»News»Atlanta review: “euphonia” (****)

Perhaps the best example of experimental film out of the 2013 Atlanta Film Festival is “euphonia.” The film struggles to sit still under the ‘experimental’ label, however, as it possesses relatable central characters, an even tone and an easily mappable and insular plot. This is perhaps the best-looking feature to ever be made for only $700, and most definitely the best-sounding. An ode to sound tech, “euphonia” is a beacon of Georgia independent film and exactly what experimental film should look and sound like.

Bored with school and idle at his sleepy department store job, Will Madden buys an audio recorder and starts collecting sounds; his new device quickly becoming a bountiful junkyard of noise. Noise is the true star of the film, but both Madden and his counterpart, Maria Decotis, put forward completely relaxed, authentic performances.

A general feeling of tranquility and informality is occasionally disrupted by an unsettling happenstance; the eeriness always related to Madden’s growing obsession and the impact his sound collecting is having on his social interaction. Although we are privileged to witness the birth of a sound editor—infused with a newfound passion—the film also serves as a cautionary tale of the interference we allow technology to have in our personal lives. Watch a couple sit at a coffee shop and notice how much they interact with their phones versus interacting with each other. 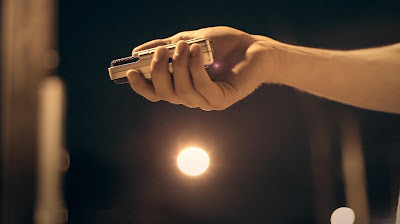 I simply cannot emphasize enough how remarkable the sound mixing is here. Much of what we hear was actually captured with the recording device featured so prominently in the film. On such a small budget, the pitch-perfect audio design of the entire picture is an incredible testament to the talent and meticulous dedication of the filmmakers. If there was any justice in the world, “euphonia” would be seen and heard by the masses and on its way to a sound mixing Oscar nomination next year, alongside what will surely be the summer’s biggest and loudest blockbusters. The film looks almost as good as it sounds, though, with Georgia’s pre-summer colors on full display in the dense woods of Fayette County and in the swirls of the dusk sky. Playful incorporation of reflections and peripheral vision add some texture to the photography.

A simple tagline of ‘listen’ speaks volumes about both the film and the intentions of the filmmakers. In creating this unique acoustic experience, the guys at Ornana have showcased their fine-tuned skills in the process.