Trending
You are at:Home»News»Homespun: A Q&A with Brantly Watts 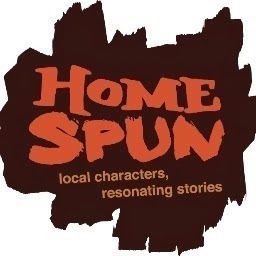 “Homespun is a series of short character films profiling unique individuals around the metro Atlanta area. Partnered by the Atlanta Film Festival, the series allows local filmmakers to collaborate with metro-area musicians, artists and other local talent while featuring the local characters and neighborhoods that give Atlanta its distinctive culture. Through these individual character studies, Atlanta will be revealed as the Homespun phenomenon it has become.”
This is how Homespun, Brantly Watts’ brainchild, defines itself. Brantly and her husband, Jon Watts, co-founded Half Pint Productions to provide a platform on which they further their storytelling and love of Atlanta. We asked Brantly a few questions about the Homespun series to get a better idea about its purpose and their dreams for its growth.
–How has the response been to the first Homespun series?

Many locals we’ve spoken to about the series seem to feel that a project like Homespun is desperately needed in the Atlanta community.  However, we were surprised by the overwhelming amount of positive feedback the first screening received, particularly regarding our subjects.  We wanted the first screening to capture a variety of people that make the city unique.  The responses we have received so far lead me to believe we were successful in our mission.  A few attendees were moved to tears by Takashi Doscher’s “Time.” As a filmmaker, you can’t ask for more from an audience.

–Have any of those films been further submitted to other festivals?

We have not submitted any of the films to other festivals due to the fact that they are so ‘local.’  However, “Machine Gun Mary” – directed by Jon Watts, aired on PBS as part of the Atlanta Shorts program.  Additionally, my film “Golden Child” will screen at the upcoming 404 Day, which will also feature Mighty High Coup – a hip hop group that contributed music for the film.

–Where can new filmmakers send their work?

Filmmakers can send completed work to homespunseries@gmail.com.  We also encourage filmmakers to contact us for filmmaker guidelines, to submit ideas or for any additional information regarding creating content for the series.  We have assembled a talented team to help filmmakers with music, graphics, art direction, licensing, etc.

–What’s the first step you would advise for aspiring filmmakers?

In regards to both the Homespun Series and documentary film in general, picking the right subject is an essential first step.  A subject may appear interesting in a proposal, but if he or she isn’t dynamic on camera the film will suffer.  Alternately, if your interview is dynamic but the subject matter lacks focus, your audience will be lost.  Jon and I often call the balance of personality and subject matter the dot dot dot (…).  What makes your subject unique?  Will an audience be able to connect with the character?  Research is a crucial step to discovering your subject’s … . If you can’t find the right balance, know when it’s time to move on.

–Which resources could most benefit a new filmmaker?

In 2012, Jon and I premiered our feature documentary, “AKA Blondie,” at the Atlanta Film Festival.  Through the festival we have met and formed relationships with many local filmmakers and producers.  The relationships we have developed through ATLFF have been our biggest asset since premiering our first film. ATLFF offers a variety of substantive and social networking events that can enable both new and experienced filmmakers to meet key industry professionals.  Networking is, and always will be a filmmakers greatest tool.

–Where can people with good stories connect with filmmakers looking for stories to produce?

I would look for networking events hosted by industry groups (ATLFF, Women in Film and Television Atlanta, Atlanta Cutters, etc.) If you like watching films, purchase a pass to one of the local film festivals (ATLFF, Out on Film, Atlanta Jewish Film Festival, DragonCon Film Festival, Atlanta Horror Film Festival, etc.)  Many festivals offer opening and closing night parties which are open to both filmmakers and film lovers. If all else fails, hang around Manuel’s Tavern one night and you will probably encounter a filmmaker or two willing to hear a good story.

–What kind of stories do you look for?
I am fascinated by people, so a story with excellent character development is what I always gravitate towards.

–What’s your Homespun vision? Do you hope for its scope to be long-term?

The Homespun series spawned from a conversation Jon and I had after the premier of our feature documentary, “AKA Blondie.”  An audience member congratulated us on being able to effectively capture Atlanta in the film.  We were flattered by the comment because we intended for Atlanta to serve as a secondary character in the film.  Later, another audience member confessed that she had no idea what ‘Atlanta’ is.  That she was relatively new to Atlanta and couldn’t find a single defining attribute to the city.  At the time, we had begun to meet more filmmakers who were focused on creating short films rather than features.  Homespun provided a much needed platform for local filmmakers to connect and create content that highlights both the local film industry as well as the heart of the city that I call home.  I sincerely hope that Homespun will continue to inspire Atlanta filmmakers to create local content.  Eventually, we would love to bring the Homespun series concept to other cities.

***
Homespun doesn’t yet know its next screening date, but you can help! If you are a filmmaker or know a filmmaker who has waited for an opportunity to be featured on an independent, story-focused platform, wait no longer. Send your completed project or prospective project plans or questions to homespunseries@gmail.com. And we’ll see you at the next Homespun!
Share. Twitter Facebook Google+ Pinterest LinkedIn Tumblr Email