Trending
You are at:Home»News»Indie #GAfilm “blackhats” Opens in Metro Atlanta on October 23rd, Ahead of VOD Release 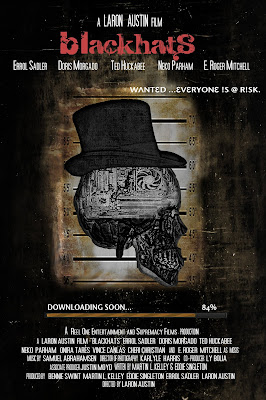 You might see us talking about big blockbusters filming here or traveling the Peach State film festival circuit, but Reel Georgia also exists to spotlight films that are fierce in their homage to our good ol’ state. LaRon Austin’s “blackhats” is just that, highlighting the beauty and charm and grit of Atlanta’s city streets.

“blackhats” is an action-filled thriller that navigates the ins-and-outs of cyber terrorism. It’s a high-pressure, high-stakes film starring Errol Sadler as a fiery ex-bounty hunter whose life is disrupted when he’s convinced to track down a colleague’s brother. Janelle, his colleague, is played by the beautiful Doris Morgado (“2 Guns”). They soon discover that Janelle’s brother is in over his head, as he’s also being hunted by the FBI and a rival bounty hunter. Believe me when I say, chaos really does ensue.

The film is written and produced by Martin Kelley, who is certainly no stranger to the Atlanta indie scene. Kelley is one of the founders of our sister-site CinemATL and is responsible for other Georgia indies like “Step Off” and “Behind the Nine.”

“blackhats” will open at Aurora Cineplex in Roswell on October 23rd, and will run on VOD later in 2015. Be sure to check your local listings for showtimes and screenings, and if you have a chance, check out “blackhats” and support true Atlanta filmmaking.

Check out the trailer: