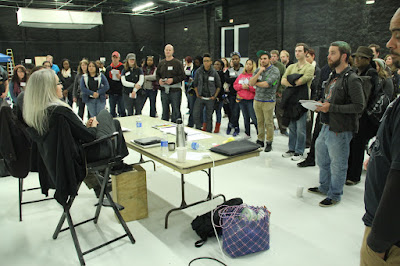 Linda Burns, long-time Atlanta filmmaker and instructor of The PA Academy (presented by Atlanta Film Society and Georgia Production Partnership), is offering several workshops in June that will appeal to those looking to break into the film industry in Georgia, or professionals looking to hone their skills in breaking down, scheduling and budgeting their scripts.

One way that Burns earned a stellar reputation in Atlanta’s film community was by staying here in the 1990s and 2000s, when much of the state’s film business was stagnant. After the film boom began in the mid-to-late 2000s, Burns’ educational offerings and partnerships with ATLFS and GPP became wildly popular. Well known for producing television and commercial work, Burns also has produced indie smash hits “The Signal” and “V/H/S.”

On Saturday June 4th, Burns is teaching the first of a two-part workshop—Breakdown & Schedule Your Indie Script—followed by her entry-level class—Create a Proper Film Resume. On Sunday, June 5th, she will follow-up with part-two—Budget Your Indie Script.

Paying someone to breakdown your script elements properly is very expensive. Using the tagging function and importing it without doing the actual breakdown work keeps you from an intimate understanding of the work at hand. Plus it never captures everything your breakdown needs, doesn’t allow for finding all the mistakes in script continuity, nor seeing the holes in your story as you dig deeper into the minutia. If you want to be a good producer, assistant director, or production manager, it all starts with understanding this process.

In order to eventually schedule and properly budget your film, you need to break down each scene in your script by its elements. From actors and extras to sets and wardrobe to blood FX and lighting gags, anything and everything you will need on set must be accounted for. This class will teach you how to breakdown a script by hand. No expensive programs or laptops needed. Bring a straight edge ruler, sharpened pencils, an eraser, and a sheet of white poster board. That is all you’ll need to successfully breakdown and eventually schedule your film. Doing this by hand is no more labor intensive than learning to use and input the same information into MovieMagic or Gorilla software. It’s all the same process and the foundation you’ll need for using any software program.

Budgeting isn’t a formula. Each project is different, but some basics do apply. You start with a complete breakdown and a rough schedule. Without doing that work, you can’t properly estimate the cost of your production. How long will it take to prep, shoot, and wrap? How many days will you need the actors and extras? How many days do you need at each location? How many wardrobe changes per actor plus duplicates will you need? What about props and set dressing? All these budgeting questions and more will be covered in this class.

Again, no budgeting program is needed. A sample blank budget will be provided to discuss the line by line needs of a typical indie production. Using the day out of days and element reports generated from movie magic software example, this class will show you how to use information generated during breakdown and scheduling to help you craft the right budget for your project.

Wonder why you send in your resume but don’t get a call? Is your film resume structured correctly or is it in corporate form? If you have film credits, this class helps you properly organize them into the traditional structure. If not, learn how to translate your real world work experience into related film experience, as well as where to get experience, how build your resume with solid credits, trade favors and network. BRING your CURRENT RESUME to WORKSHOP in the class.