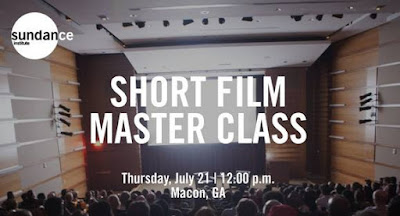 The 11th annual Macon Film Festival kicks off on Thursday, July 21st and runs through Sunday, July 24th. Through a partnership with Sundance Institute, Middle Georgia’s largest film organization is kickstarting this year’s festivities with a high profile Master Class from acclaimed, Georgia-born filmmaker James Ponsoldt and long-time Sundance Short Film Programmer Mike Plante.
The half-day educational workshop will guide attendees on how to get the most out of resources to make a successful short film within development and production. Film festival strategy will also be touched upon.
The Short Film Master Class takes place at Theatre Macon, a venue that is new to the festival, but located only a block or two away from all of the festival’s other principal venues. Check-in begins at 11:30 AM, with the class running from 12 PM to 4 PM and a reception set to follow. Registration is FREE but required for admission.
A free Friday Day-Pass to the Macon Film Festival—which includes a Friday evening screening of Ponsoldt’s “The End of the Tour”—will be handed out at check-in. Ponsoldt’s 2013 film, “The Spectacular Now,” will also screen on Friday at 11:50 AM at The Douglass Theatre.
Stay tuned for more 2016 Macon Film Festival coverage!
For tickets and more information, visit www.maconfilmfestival.com
Share. Twitter Facebook Google+ Pinterest LinkedIn Tumblr Email