Several University of North Georgia (UNG) students from the film and digital media program won the Audience Award at the 2017 Athens 24 Hour-ish Film Festival for their horror-comedy short film, “And Beyond.”

The students wrote, shot and edited the film in less than a weekend, beginning April 26.

The students involved in the production were Tatianna Pangle and Jeremy Thao as the co-producers, Tylere Brown as the director of photography, Brandon Adams as first assistant camera and key grip, Tyler Calder as the sound recordist and audio mixer, Tara Toombs as script supervisor, and Kristina Kromer as editor. Thao also wrote and directed the film, while Pangle and Madeleine Pearson starred in the piece.

“And Beyond” takes place in an alternate universe where Tom Hanks is president. It follows two friends as they discuss the politics of their universe and through the conversation, one friend decides to do something drastic, which would change their relationship forever. The premise was one of the required elements mandated by the festival organizers. Every team had to incorporate the famous actor as president, a red shoe, and a specific line of dialogue into their films.

“Competitions like this challenge filmmakers’ creativity and test their ability to buckle down and do the work. This crew of students demonstrated their artistry as well as a high level of craftsmanship, both things which we instill in our majors. We’re very proud of them,” said Jeff Marker, head of the communication, media & journalism department. 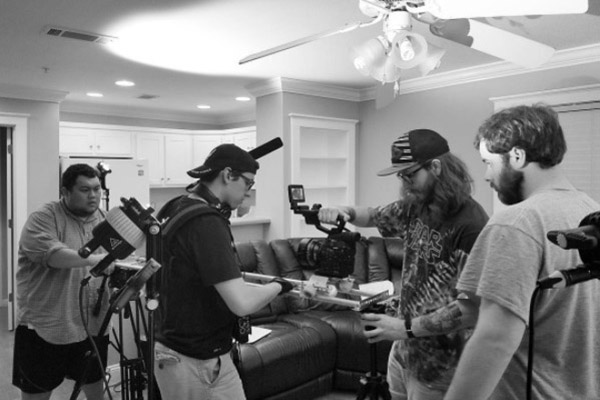