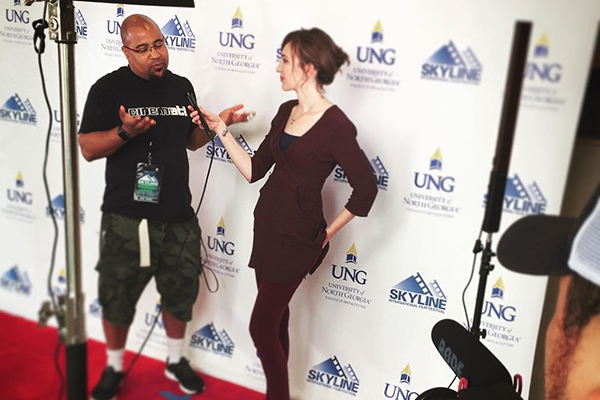 Film and Digital Media students at UNG conducted quick Q&A sessions before the start of film screenings during the second annual Skyline Film Festival at the UNG Gainesville Campus.

The Department of Communication, Media & Journalism (CMJ) at the University of North Georgia (UNG) hosted its second annual Skyline International Film Festival on May 19-21 on the Gainesville Campus.

Skyline is a three-day student-run film festival that generated more than 3,000 submissions from 113 countries, including many students and first-time filmmakers.

“It takes a small village to host a festival of this scale, and I am proud of what we accomplished,” said Jeff Marker, head of the department. “The student leaders, faculty and staff volunteers, community volunteers, and amazing audiovisual team ran everything impeccably. Numerous significant others of the festival staff also chipped in. I usually shy away from this analogy, but a bit of a family atmosphere developed over the course of the weekend. There was an inspiring degree of cooperation and camaraderie among the staff, which made the whole weekend enjoyable even while we were working very hard. I couldn’t be more proud.”

Skyline is designed to be both a community-uniting cultural event and an educational opportunity. Attendees got to see independent films from around the world and learn from industry experts through panels and workshops.

In addition to the film lineups, the festival featured two days of panels and workshops in categories such as post-production, animation and television.

Panelists this year included Drew Sawyer of Moonshine post production; crowdfunding expert and filmmaker Christina Raia from Seed&Spark; Jodi Tovay, producer of “Disney Cruise Line: Behind the Magic” (2013); and Tara Ansley, who is known for her work on “Tragedy Girls” (2017).

Animators Allyssa A. Lewis from the Georgia-based FX animated comedy “Archer” and Molly Coffee of Zombie Cat Productions were on hand to discuss the impact of contemporary digital advances on animation practice. The two talked about traditional production methods and the future of animation.

“The atmosphere throughout the weekend was supportive and the energy was great,” Marker said. “The incredibly talented panelists and filmmakers in attendance were generous with their time and imparted so much wisdom. One festival goer remarked that the panels were among the best he has attended at any festival in Georgia. We began new relationships and deepened existing relationships with a number of other festivals, organizations, and filmmakers whom we are excited to support, which will help us secure opportunities for students and strengthen our Film & Digital Media program. And above all – it was fun! We’re building an annual event the entire northeast Georgia community can be proud to support and anxious to attend.”