Trending
You are at:Home»News»Georgia Southern IT students to host night of gaming, computer networking

The Georgia Southern University Department of Information Technology (IT) hosted TekLAN 46 throughout the IT building. Put on each semester by IT students, the event includes gaming, board games, movies, coding and networking, both on the computer and socially.

The student chapter of the Association of Information Technology Professionals is the driving force of the event’s planning, development and gaming setup. TekLAN is a real-world IT student project including system networking, troubleshooting and lab resetting. 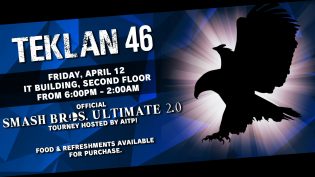 “We pretty much take over the entire second floor of the IT building,” said Assistant Professor of IT, Russell Thackston, Ph.D. “You’ll see most of the events in the labs and classrooms and plenty of people walking around socializing. We usually have about 300 people total as the event runs past midnight.”

Most of the gaming happens in rooms 2208/2210, where the wall between the rooms is opened and all the lab computers are converted into gaming computers. In the other rooms, we have a virtual reality lab, console gaming, “Dungeons and Dragons” short campaigns, anime, movies, boards games and card games.

This semester’s tournament game is “Super Smash Bros. Ultimate 2.0,” on the Nintendo Switch platform. There will be extra systems provided, but students often bring their own. The video game tournament is one of the most popular events at TekLAN.

“The students that come to engage in TekLAN activities are from all kinds of disciplines like political science, English or biology,” said Assistant Professor of IT, Elizabeth Rasnik, Ph.D. “We recommend attendees just jump into playing games with other students. They’ll find tons of stuff to watch, do or learn while having fun. It’s a great event for personal networking. Campus organizations get involved with information booths, selling concessions and even recycling programs.”

The student organizations that participate and are involved in the production of TekLAN include Aurora Game Development Club, Anime Club, Creators Club, Eagle ESports, Geeks ‘n Gamers, Green Ambassadors and Women in Technology. These groups are instrumental in the organization and implementation of the event.